Our contribution to sustainable agriculture

He owns almost 1,500 hectares in Mecklenburg-Western Pomerania and works focused on reducing his carbon footprint. As a business angel and with his know-how, he actively supports founders in organic farming. Christian Schultz and Roger Schwarz invest among other things in projects in the field of sustainable food. Roger Schwarz is involved in social projects in Africa.

The Committee ensures that all products developed by Agrando take the sustainability impact into account. For this purpose, three maxims have been developed that help to make European agriculture more sustainable:

Agrando depicts both the processes of purchasing inputs and, in perspective, the processes of selling the harvest. This means that all products that a farmer uses are automatically documented by Agrando and can therefore be tracked from the time of purchase.

Organic farming has become a key issue. From an economic point of view, it can also be an important step for the farmer to prepare his farm for the future. However, there is currently a shortage of sufficient suppliers from which farmers can buy their organically produced products. Here we can help to solve the problem: On the one hand, Agrando includes a Germany-wide network of country dealers who sell resources for organic cultivation. On the other hand, we are striving for a partnership with the Association for Organic Agriculture Naturland. The aim of the partnership is to expand the Agrando plattform with additional filters, so that we become the largest independent product database for biologically applicable equipment.

Experience shows that farmers often lack practical knowledge and the necessary exchange to make their processes more efficient - for example, in the more efficient use of pesticides or in the reduction of water use. Agrando Pro offers the opportunity to uncover such knowledge gaps and to close them systematically. The standardized company analyzes recognize how efficiently the companies operate. Agricultural experts within the Agrando team evaluate these analyzes and develop solutions. Our goal is to make this information available to all farmers so that each farmer can increase their efficiency through more knowledge. 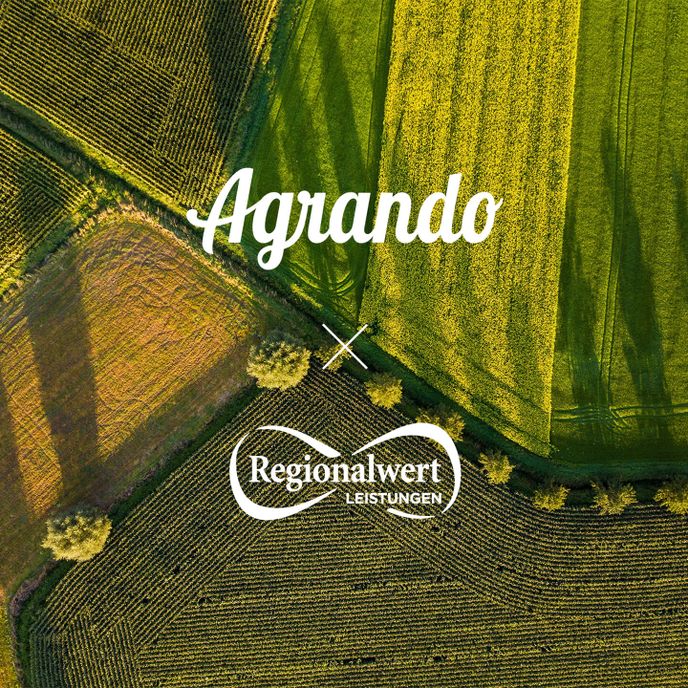 Sustainability and resilience are value factors of the future

Rethinking and creating regional economy - that is the task Regionalwert AG has set itself. It researches methods of how sustainable management pays off financially for agricultural enterprises and encourages entrepreneurial ecological action with a regional reference, a pluralistic understanding of the economy in a local manageable way. Agrando supports it as a partner and actively offers its solutions to farmers that are open to more efficient and sustainable farm management. By operating sustainably, farms can strengthen their resistance to crises - whether organic or conventional farming.

For Farmers For Retailers For Producers Live Demo Product Catalog

About Us Our Team Careers Job Board WE ARE HIRING! Agrando Magazine Press